This Toronto couple is a perfect example of why landlords should always check the rental history of all applicants. Do not simply rent to someone because they can pay the equivalent of two or three months rent up front. That may be the last money you see!

(They got away with their “elaborate scam” for 10 years, apparently).

A Toronto couple is facing charges after allegedly participating in a decade-long scam at eight different rental units. According to Toronto Police Services, the couple would pay first and last month’s rent upon moving in, but then stop rent and utility payments altogether.

When taken to the Landlord Tenant Tribunal for early eviction, TPS alleges that “the man and woman would then provide a number of fictitious excuses including loss of employment in order to prolong the eviction.”

Once the eviction process was completed, the couple still owed payments to the landlord, but would “continue to seek out another rental property, repeating the same pattern,” police say.  Both individuals are facing seven counts of Fraud over $5,000 and two counts of False Pretense….

Always check rental history on all applicants. See an overview of tenant screening services available to you.

The following sins have caused a premature death to the cash flow of millions of landlords.

How many sins have you committed? Change your ways before it’s too late, and sin no more!

Avoid one of the main sins. See an overview of tenant screening services available to you.
.

Do tenants have to agree to multiple credit checks?

— Stan
A: When you purchased a home in a planned community, you agreed to live by the rules. This is the trade-off for the amenities and aesthetics for living in this type of neighborhood. If your community rules require tenant screening, you will need to jump through this hoop. You can try speaking with management to see if they are willing to use the credit report your agent already obtained.
There are two types of credit checks commonly used for tenant screening. A “soft” pull is like checking your credit history, when you get a pre-approved credit card offer, and does not show on your report. A “hard” pull is the type you get when you apply for a car lease or loan. This type of credit check will slightly lower your credit score for a short time.
Most credit reporting companies report related credit checks made within a short period as a single check for scoring purposes. This allows consumers to shop around for the best deal without destroying their score. Understandably, your prospective tenants are frustrated with having to go through a second screening process. They still need to go through the process if they want to rent in your community.
Editor’s note: All credit checks run through tenantcreditchecks.com are done as a soft pull.  Sign up for your free tenant screening account. 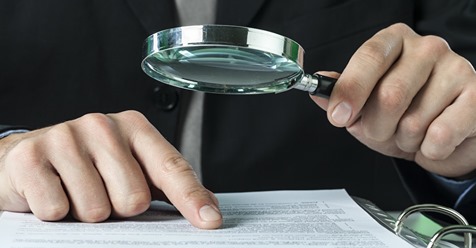 Snappt surveyed 100 residential property managers who manage more than 1,000 units and found that 66% had been victimized by fraudulent applications.

“If someone understands the law, they can stop paying and live rent-free for six months while we work to evict them,” said Chad Vasquez, general manager of Circa LA.

A typical property manager reports 15% of their online rental applications show proof of obvious fraud, while the respondents estimated that an additional 10% of fraudulent applications get processed unnoticed.

“The increasing number of self-employed applicants, a move to online rental applications and the increasing availability of tools to fraudulently alter financial documentation all make the problem more common,” said Daniel Berlind, CEO and co-founder of Snappt.

Half of evictions result from application fraud.
Use our new Document Screening tool to spot fraudulent documents.

I admit that I used to make a serious mistake that would put a lot of what I had at risk. I used to not do credit checks. Now after doing them for several years, I will NEVER accept a tenant without first seeing their credit report. The potential resident’s credit report has so much information about them that you are not seeing when you don’t run a credit report. It’s not just a question of whether they have good credit or not.

On a credit report you can see if the social security number even matches the applicant. You can get a glimpse of the type of lifestyle payment choices that affect the applicant’s debt and how much debt they may have. This may be hidden from you otherwise–and so much more.

There are many times that I have been extremely thankful and relieved that I ran a credit check on an applicant. I probably would have accepted the applicant as a resident had I just gone with other free information that was available to me.
All I can say folks, is I hope the best for those of you who continue to play Russian roulette with your rentals. But honestly, for less than ten bucks (the cost of a credit report), it really does not make sense that you are taking the extra risk of not seeing a credit report before accepting any applicant.

You all know as well as I do that it only takes one wrong selection of a resident and that can cost you thousands if not tens of thousands of dollars. And yet some of you don’t think it’s worth the ten dollars to run a credit report. Come on. When I used to not run a credit report it was because I was naive and simply didn’t know better or it was because credit reports were not as easily accessible as they are now. The excuse that says that because your competition is not doing them means you don’t have to is NO excuse. Even if you don’t want to charge the applicant, still run the credit report.

Because of competition, at times I often run a “Special” – No Application Fee This Week! It’s not that qualified applicants care that you run a credit report. They simply (in some areas) may not want to pay a fee. So don’t charge them the fee…. But I’ll say it again, RUN the report. YOU are the one with so much potential to lose and all because you’re too cheap to run a ten dollar credit report. Friends, this is another classic example of landlords being too frugal for their own good. Don’t make the serious mistake I used to make. Always run the report!
– Jeffrey Taylor, Founder of MrLandlord.com

THE TRUTH ABOUT EVICTION REPORTS

A large Apartment Owners Association recently conducted a study of six of the major sources/providers for information on evictions. The association ran at least 1,000 different prospective resident names through this study with each source so that the research would be statistically accurate. Then they compared the data obtained from each source.

When the study first started, they were only looking for the percentage of “hits” each source could produce. A “hit” is described as when a discovery is made that a certain prospective resident has been evicted before. When they finished their research, they wanted to identify the company that provided the highest percent of “hits” with proper pricing. To their surprise, they made a major unexpected discovery!

Most professionals in the industry communicate like all major eviction sources are the same. WRONG! They all tell us that they send messengers to most of the courts and gather that information into their file. So, the logic went: “How could there be any difference?” But, one prominent eviction attorney estimated that when you run a single eviction search, on average, your source will only uncover about 60% of the actual cases. The study proves that the eviction attorney was close to being right and that there can be a difference of over 100% between companies that are considered the biggest and/or best in the industry for providing eviction reports. In other words, in many cases, you may have been missing over one half of all eviction cases when you order an eviction report from one source/provider!

Every file the study tested missed some of the “hits” or evictions that other reporting companies had recorded! Evicted residents were slipping through the cracks. You were being tricked when these prospective residents stated on their application that they had never been evicted. Can you blame them — they’ve had better than a 50% chance of not being found out!! In examining the various reports, the study discovered that the prospective residents missed on one report would many times show up on another report and vice versa. The data gatherers were not all equal!

Something else you’ll find interesting and imperative–a credit header is a computer program the eviction recording companies use to extract the most accurate information from their data. They start with the raw data and then “search” for the exact match for the resident that you or your property management company is screening. They can also show the names of “possible” matches as there are many people with the same name. There is usually no social security number on eviction reports like you have with your credit report. However, there is one company that MrLandlord.com is now using, that attempts to match as many social security numbers as possible by using a huge data base of additional information.

This company, now one of those being utilized by MrLandlord.com, obtains as many social security numbers as they possibly can and this improves their accuracy. So if you do see a social security number on your MrLandlord.com Enhanced Eviction Report, you’ll know that this is a new feature and most associations and/or companies do not provide this information to help make a true match. In some cases, the study was able to test their raw file as well as the results produced by their credit header. Some of these credit headers will use the information on the credit reports to increase the accuracy and number of address matches. This produces a distinct improvement.

Part of the study looked at the results of providing two eviction reports by two different companies and presto, they ended up not missing as many of the cases that were slipping through the cracks. A definite reduction in the number of the tricks that residents play on unsuspecting owners! It seems so simple that you probably wonder why no one ever thought of doing this before. Many landlords will obtain two credit reports to ensure that they get as much information as possible, but they have never considered that it is even more important to obtain two eviction reports. Sooooo….When you now order your “MrLandlord.com Eviction Report,” the information will now be coming from two different and distinct sources. You will be receiving a report that is taken and put together from two different companies. An industry first! The study shows clearly that this is the best and most thoroughly tested report currently available.

Does this “guarantee” that you will never rent to a bad resident again who was evicted by another housing provider? No, but you’ll sure come a whole lot closer to that goal as a result of using this new Enhanced Eviction Report provided by MrLandlord.com!

EDITOR’S NOTE: I personally use the tenant credit service and eviction reports on MrLandlord.com. I was one of the first to utilize the new “enhanced” eviction reports when they were unveiled. And sure enough, with the two national reports now provided instead of one (at no additional cost to you) I was able to catch 4 evictions that I would not have previously seen. Plus, it was great to see some social security “matches” connected with the eviction So I knew with greater certainty that my applicants were indeed the ones caught.

Between 9am and 8pm Pacific Standard Time (PST) Monday-Friday. On Saturdays 10-5pm (PST) Click here to request one or more of the featured services from TenantCreditChecks.com!